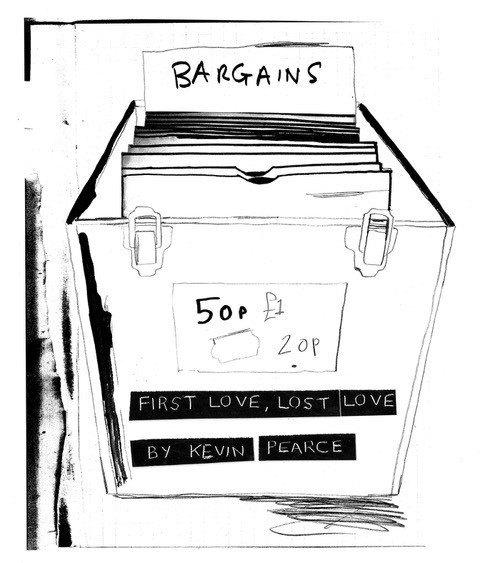 Choose a good record and it will stay with you forever. The same goes if you’re lucky enough to find yourself a good local record shop. Kevin Pearce spent his formative years (and his hard earned cash) in an unpretentious South London record shop. Here he reminisces how Cloud 9 helped shape his life:

Lawrence once said something brilliant about remembering every detail of a day when you bought a particular record. There are not too many I can say that about. I can, however, recall being round a friend’s house one afternoon during the school holidays, listening to records, and then instead of walking straight home taking a long detour up to the high street, via a graveyard, to buy a copy of the Wild Swans’ ‘Revolutionary Spirit’ 12”. Some things just stick in the mind.

I’ve been thinking a lot about the record shop where I bought that incredible single. It was called Cloud 9, and it was for many years situated very near the Silver Lounge coffee bar where Dave Godin had his moment of revelation when he heard Ruth Brown singing ‘Mama He Treats Your Daughter Mean’ on the jukebox. I had no idea about that link when I was a kid and regularly made a real nuisance of myself in Cloud 9. Both the coffee bar and the record shop are now long gone, but I realise now I would never be the person I am if there hadn’t have been a box on the counter in that record shop filled with all sorts of old punk and new wave singles.

On the face of it there was nothing remarkable about Cloud 9. It was a small business enterprise situated on a suburban south east London high street. It wasn’t a specialist shop, like say Dave Godin’s Soul City or Rough Trade. It didn’t sell old collectibles. It wasn’t the sort of place you would find supercilious snobs behind the counter, patronising their customers. I doubt if the proprietor ever sneered at a customer in his life. He didn’t impose his own tastes on anyone else, and it’s difficult to recall what music he played in the shop. I guess the name of the shop suggested where his allegiances were, but he didn’t make a big thing of it. He simply sold records, with the emphasis on new releases. In that respect the shop was truly egalitarian.

The owner was a guy called Eddie. Between, say, the summer of 1977 and the summer of 1982, I must have gone into his shop every day it was open, but I never got beyond nodding terms. He was a man of few words. He was small, slight, polite and quiet. He was probably in his 30s in the late ’70s, but it’s difficult to tell. He sat behind his counter and he served customers. He was helpful, humble, and a perfect gentleman. A friend went in once and asked for the new Wah! single, and Ed trying to be helpful simply passed over the new Rah Band record. It would, after all, have been bad form to draw attention to someone’s speech defect.

I was 13 in the summer of 1977 and got into the punk explosion in a big way. That’s not an argument for punk’s cultural significance. It’s just the way it happened. I simply graduated from Look-In to Sounds, from Showaddywaddy to the Adverts. And Cloud 9 with its box of punk and new wave releases was an endless source of fascination. Goodness knows how many times I flicked through the 7”s in that box, delighted at seeing singles I’d read about in the music papers or heard on the John Peel show or during Alan Freeman’s Saturday afternoon programme. As a school kid with ridiculously limited resources there was usually more looking than buying, but I have very fond memories of purchasing certain records in that shop.

The curious thing is, looking back, how such a small shop managed to get in the stock it had. In the late ‘70s as more records seemed to emerge on small or independent labels there never seemed to be much difficulty in getting hold of these releases in Cloud 9. I can vividly recall getting the Visitors’ Electric Heat EP and the Swell Maps’ A Trip to Marineville LP in there, for example. And it never seemed to be a problem for Ed to order in a particular single on an obscure label. I took it for granted at the time, but now I am deeply curious about the process and practicalities of this. Who did distribute independent singles in the late ‘70s? Who did he ring up to place his orders?

Next to the box of punk and new wave singles there would be another box which contained ex-chart singles and other reduced items. For a kid with only so-much pocket money this box was another constant source of fascination. It also brought out the gambler in me: “Should I hold my nerve and wait and see whether the new Buzzcocks or Banshees single hits the bargain box? Or do I need it now?” As time went by there would be more boxes, containing cut-price 12” singles. The serious soul boys would go elsewhere to buy ridiculously priced imports but Cloud 9 kept a pretty good stock of club sounds. Again, I have fond memories of paying 50p and taking a chance on 12”s of Frankie Smith’s ‘Double Dutch Bus’ and Kurtis Blow’s ‘The Breaks’ having read about them in The Face.

We nearly all move on from our first loves, and betray the memory of something that changed our lives. So, it was that having left school in 1982 and got a job, I would more often than not go into the West End to do my record shopping. That seemed more glamorous than buying locally. And it became gradually harder to obtain records on independent labels once the likes of Rough Trade, Revolver and Red Rhino got their distribution networks up and running. More significantly, as the ‘80s progressed, the relentless search for abandoned vinyl meant more and more time was spent in charity shops and at boot sales as new vistas opened up and life had increasingly little to do with new releases.

As the years passed I would seldom go into Cloud 9, and then I would feel rather guilty about returning purely to pick up the occasional Kent soul compilation. Occasionally, though, the shop hosted wonderful one-day sales where the upper floor would be opened up and there would be lots of that strangely polite jostling going on as collectors gathered armfuls of records. I can recall one haul that included John Cale’s Music For A New Society, Pop-ish Frenzy by the Purple Hearts, a Baba Brooks compilation, and a Revolutionaries dub set, all at £1 each. At the start of the ’90s I seemed to go into the shop more often, flicking through the reduced singles and stocking up items from what was a bit of a golden age for pop: Marina Van Rooy, Ashley & Jackson, Unique 3, Definition of Sound, Gang Starr, A Tribe Called Quest, and so on.

The last record I recall buying in Cloud 9 is the 12” of Tricky’s ‘Aftermath’ when it first came out and was available for a special promo price of 99p. Then, one day it just seemed the shop disappeared. I don’t know if it was being undercut by the big retailers that had muscled in, but then there had always been competition. In the late ‘70s there were at least half a dozen other places you could buy records on the same high street alone, but Ed’s shop was thriving then. I suspect the closure of Cloud 9 had more to do with the rising cost of business rents which continues to kill off many a small retail concern. The romantic in me, however, wonders whether Ed thought the game was never quite the same once compact discs became common currency. That’s pure speculation. I really have no idea what became of Ed, but I do know I often feel horribly guilty about never having shaken him by the hand, adult to adult, and told him how much his little shop shaped my life.

And, yes, I do remember the day I bought my first Felt record. It was the Crumbling The Antiseptic Beauty LP. Ed had ordered it specially, and I went along to Cloud 9 to collect it during the lunch break from my Saturday job working behind the counter in Boots The Chemist. I can picture myself taking the record back to the shop, sitting in the staff room and looking at the sleeve while I had my ham and tomato roll.

This article was originally published in issue #12 of An Antidote To Indifference. Find out more at caughtbytheriver.net

Kevin Pearce writes regularly at Your Heart Out