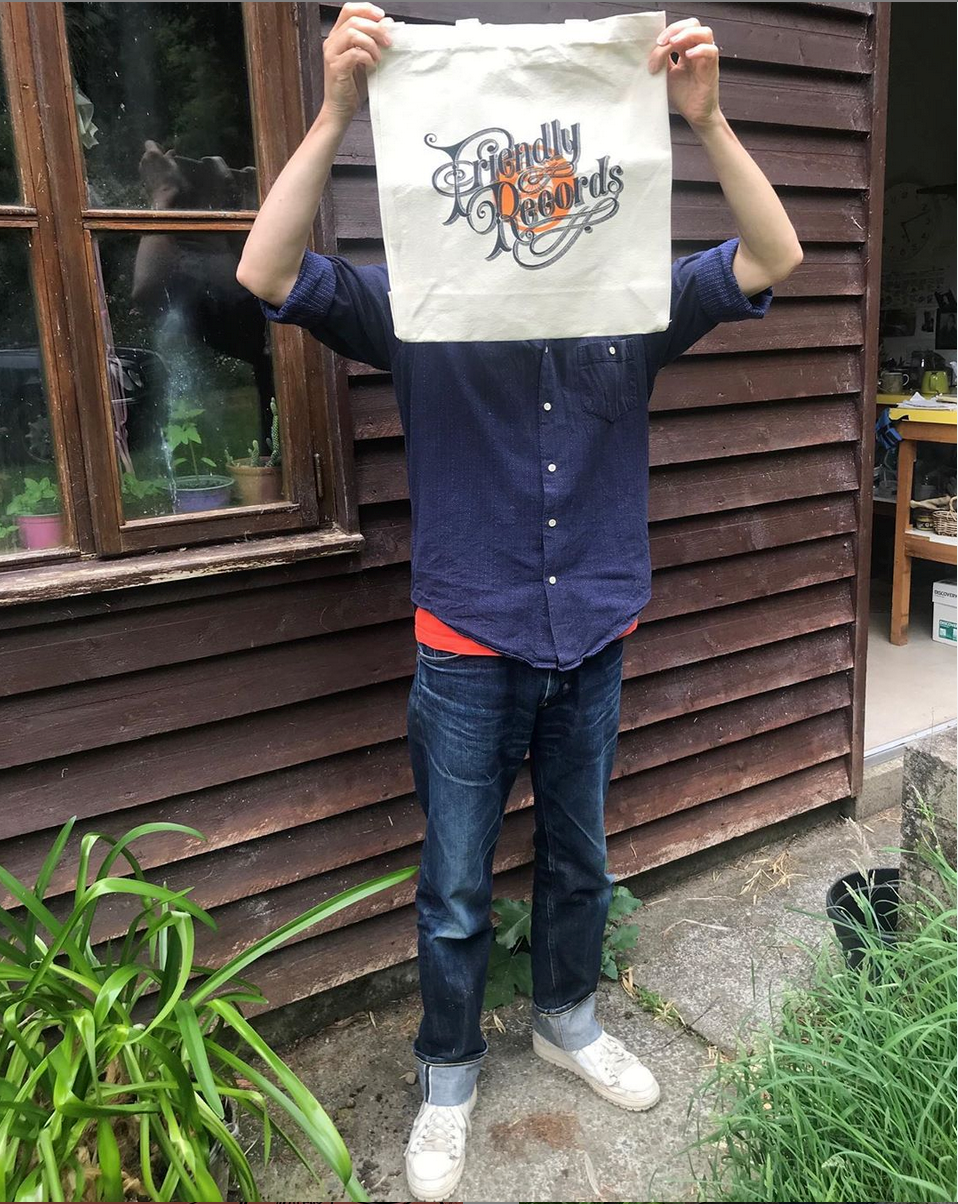 An extract from Original Rockers by Richard King (Faber & Faber, 2015)

Within a few years of trading Revolver had earned a reputation for stocking the definitive releases of every genre. Rather than trading as a specialist shop, Revolver was regarded as an authority on every style of music. By the mid-1970s it had become the place to buy reggae in particular, a music imbued with unspoken rules and customs of purchase that were enacted at the shop counter in an almost ritualistic manner. Much of the shop’s stock of new releases was bought directly from the Jamaican source; a network of vans and drivers used to arrive at Revolver with a selection of current imports, or a wholesaler, Jet Star in Harlesden, provided a regular supply from the studio- owned pressing plants and record shops of Kingston.

There had previously been specialist reggae shops in the city, notably RCA (Record Collectors Association) a father- and-son establishment on Picton Street in Montpelier. The shop sold imported bluebeat and rocksteady singles to a clientele that included suedeheads and local DJs. Another outlet was located in the Bamboo Club in the neighbouring district of St Paul’s, an area that had a high concentration of Jamaican residents.

This inner suburb near the city centre had suffered during the Blitz, and many of its inhabitants had been rehoused in new estates built at the edges of the city during the expansion of the 1950s. The area experienced deprivation and a lack of investment during the post-war years, but because of the availability of rented accommodation in its spacious Georgian terraces it became popular with first generation immigrants, many of whom were from the Caribbean.

The Bamboo club opened in 1966 on St Paul Street in the heart of the district. In addition to a concert hall and record stall, the club contained a hairdresser’s shop and a restaurant. It was also the headquarters of the Bristol West Indian Cricket Club. As well as performing there, Bob Marley is said to have visited the club regularly on his debut European concert tour in 1973. As roots became a formidable and popular style of reggae in the 1970s, the Mighty Diamonds, Big Youth and Burning Spear were among the artists who played in the Bamboo Club. Despite the strength and resilience of its community spirit St Paul’s was increasingly left bereft of resources by the local authority. This deprivation was accompanied by the commonly felt sense that the area suffered from oppressive treatment at the hands of the police, particularly in their deployment of the ‘sus’ law that allowed patrol officers to make arrests merely on the grounds of suspicion. It was widely acknowledged that the arrest of black youths was disproportionately high and that they were especially victimised by the police. The tensions within St Paul’s extended beyond race lines. Regardless of their class, colour or heritage, its residents often felt that their neighbourhood was purposely being starved of facilities and infrastructure by the city’s authorities, who often gave the impression that they regarded the area as little more than derelict. Along with the Bamboo Club, St Paul’s had an informal network of venues and after-hours meeting places, ‘blues’ clubs that included the Ajax and the Blue Lagoon and cafés, such as the Black and White which served West Indian food twenty-four hours a day. These establishments acted as safe houses and small, self-reliant community centres. They were regarded as spaces where identities were allowed to flourish. The authorities outside the district felt intimidated by the presence of late-night conclaves in St Paul’s, and tended to define the activities within them as provocative and largely criminal.

Blues parties were held either in clubs, people’s homes or occasionally in an abandoned building. The parties began in the early hours of the morning and finished once they had reached a natural conclusion, regardless of licensing laws or curfews. When the sound system was positioned in a confined interior location such as the front room of a terrace house, the music it broadcast created a nocturnal pulse.

Against the end wall of a street or in the lee of a derelict building, the physical presence of the sound system was of such strength that it transformed its surroundings into a shared sacred space. In plain sight it became a location where the echoes and delays of dub were refracted at a volume and frequency capable of creating a tangible and temporal other.

For the Rastafarian community living in St Paul’s, largely comprised of second-generation immigrants coming of age during social and economic difficulties, the sound system represented a locus for renewal. The immediate vicinity of the sound system became, for the duration of its broadcast, an area temporarily free of life’s hardships. It represented instead an affirmative, even deified, territory that had formidable presence. Reconditioned speaker cabinets, stripped-back circuit boards and amplifiers specifically constructed to carry single EQ signals were placed in an improvised semicircle on the pavement. The sound system was designed to produce frequencies that were felt rather than heard. For the sound-system operator the desired reaction from the audience was not that they merely danced but that they surrendered themselves to the authority and intensity of the sound.

The rise of the sound system in Britain coincided with the expansion of dub as a creative medium, one that signified a rejection of material conditions and re-imagined reality as a haunted sphere. Across each separate, purpose- built channel, the system took the base constituents of the recording and reproduced them as disparate elements that could be controlled in isolation and manipulated into an exalted form of incantation.

To the crowd moving to the bass lines echoing across the streets, the eeriness and dread of dub represented an ineffable truth. Snatches of roots lyrics whose subject was repatriation and freedom from the yoke of materialism were heard amidst the disorienting instrumental drop-outs. The words hung in the air, reverberating and repeating at the centre of the sound system’s abstract and eternal sounding space, their meaning restated as calls to prayer and rebirth.

In an area of deprivation such as St Paul’s, hearing the harshness of everyday experience echoed back on oneself by the sound system became a form of resistance. For anyone suffering discrimination from the police or from employers the system represented not merely a form of escape but a means of devotional self-expression.

The records were known as ‘pre’s, or pre-releases, and dubplates. Rather than finished product for commercial releases, these were acetates or releases limited to a handful of pressings that would be sold or distributed directly to sound-system DJs and controllers. Many of these recordings received their first public air play at ‘battles’, where rival sound systems would compete for the approval of the crowd, or at parties in the community where visiting systems played new selections. Dubplates and ‘pre’s that proved their worth in these situations became known as ‘weapons’. The implied confrontation in the terms ‘battle’ and ‘weapons’ was justified, as police raids on sound systems, which were felt by those attending to be hostile incursions into community relations, were frequent. The system had little use for albums or any recording cut at a frequency spectrum inadequate for its bass bins.

In Bristol one of the richest and most reliable source for ‘pre’s and dubplates was Revolver.

At the time of the popularity of the sound systems, Revolver’s founders had left and the staff now numbered three: Chris Parker, its owner, and two assistants, Lloyd Harris and Mike Chadwick. Revolver had created its own supply chain for ‘pre’s, dubplates and all other reggae releases, including a van delivery service driven by Adrian Sherwood, one of Britain’s most trusted reggae adepts.

Each week a limited number of imported releases would arrive and the sound-system operators would convene at a designated time at the shop’s counter to evaluate the delivery. This sale of goods had its own protocol, a form of auction whose procedure had been underwritten and was exclusively understood by the sound-system operators. Within seconds of one of the shop staff playing a new release, an operator would lift a hand to signify their decision to buy the record, which was swiftly removed from the turntable. It was imperative that the record was only heard for as scant few bars as possible, in order that its potency when played on the sound system remained intact. When Revolver was able to buy more than one copy of a record the operator bought the entire supply to ensure its scarcity.

In the streets of Kingston vinyl was created in a closed production line; the studios in which the music was recorded had direct access to the island’s pressing plants and on manufacture the records were sold in the studio’s own store front.

A handful of the batches of records that had been created by this method would arrive as exported goods at Revolver. The vinyl regularly bore off-centre labels or surface crackles, anomalies that acted as badges of authenticity. Most, but by no means all, imported releases came in a cardboard, or more usually paper, sleeve. The materials used in their construction often had the hallmarks of previous usage such as brand names from cereal packets or other dried foods, reminders that these records were a commodity from and for a specific culture.

The mere act of holding an imported Jamaican 7" made 50  the street economy of reggae self-evident, as if a natural resource had been extracted at its headspring and exported with as little outside interference as possible.

At the blues parties the Revolver staff were recognised and welcomed. Lloyd Harris told me that his attendance was dictated by stamina after the realisation that the parties often reached their climax at approximately the time he would usually be opening the shop.

In December 1977, on the eve of a Sex Pistols concert it was due to host, the Bamboo Club burned down and an amenity for the entire St Paul’s community was lost overnight. The shared spaces such as the Ajax and the community centre that remained took on an added importance in the cultural life of the area. By the late 1970s St Paul’s was experiencing disproportionately high levels of unemployment among black school leavers, many of whom often saw their equally or less skilled white contemporaries successfully apply for positions for which they had been rejected.

In 1980 St Paul’s rioted. The provocation was presumed to be a dispute between a customer and the police during one of their regular raids on the Black and White café. Many in the community, however, having experienced such enduring oppression, regarded the riot as inevitable rather than as a response to a specific incident.

An extract from Original Rockers by Richard King (Faber & Faber, 2015)